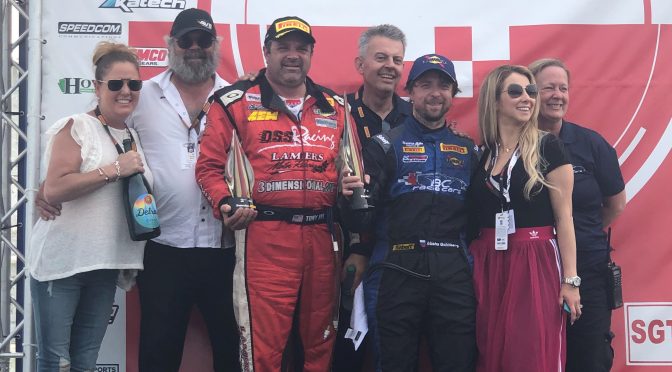 Misha Goikhberg in the #10 BCR Camaro brought BC Race Cars its first ever Trans-Am victory in our 15 year history with the series at the Chevrolet Detroit Grand Prix!

Not only did Misha win, he turned the second fastest time of the race, missing it by only 0.03 seconds. “I wasn’t trying for hot laps, just maintaining the gap to second” said Misha. The win represents his first victory in this series as well.

To add extra icing on a great day for BCR, Tony Ave in the sister Camaro #25 finished 2nd to Misha on Saturday. A 1-2 podium finish, very seldom accomplished by any team was an absolute bonus!

As a double header weekend, we were excited about our chances for Sunday’s race as well. Misha started on pole, and Tony 5th as the cars were lined up according to fastest race laps from the day before.

A very eventful race ensued with 4 different leaders and many stages to the race. When the tire smoke settled, Tony Ave, in his 100th career Trans-Am race start emerged as the winner, an absolutely amazing accomplishment! Misha drove to a great 4th place.

“We at BCR are so elated about the weekend, sweeping both races with our Chevy powered Camaros at the Chevrolet Grand Prix” states Blaise Csida, team principal at BCR. “Katech continues to be instrumental to our engine program and I know these wins are special to them as well. We have two incredible drivers, a great series with awesome cars, and an amazing crew to make this happen! I am so happy for us and for Misha, it has been a long time coming. Also to be part of achieving Tony’s first win in Detroit on his 100th start is something amazing! ”

Watch a lap with Misha on his way to victory…