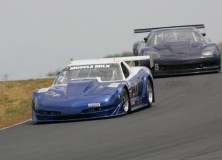 Take a tour of Laguna Seca with Elmer Shannon of Oakland California in his 2006 Super Modified Chevrolet Corvette F430 built by BC RACE CARS.  This 2006 Corvette was initially built for Rich Dederian of Lakehead California after he fell in love with Shannon’s 2004 Corvette. Elmer recently purchased this race car from Rich, see some hot laps on board from Laguna Seca:

Elmer will be competing in the GT-1 class at the 2014 SCCA National Championship Runoffs held at  Mazda Raceway Laguna Seca during the week of October 6th in his 2004 Chevrolet Corvette.

The 2004 Chevrolet Corvette was built by BC RACE CARS and driven by Blaise Csida in Trans-Am and GT-1 events in Canada and the USA from 2004-2005. Elmer purchased the car in  2005 which he mainly raced at his home track of Thunder Hill in California, but also entered a number of SCCA Pro-Racing Trans-Am races from 2009 to 2011.  In 2014, Elmer has competed in a number of  SCCA National Events, earning him a spot in the 2014 SCCA National Championship Runoffs.

We at BC RACE CARS wish Elmer a safe and successful weekend at the Runoffs.