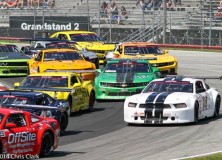 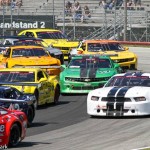 Round 7 of the SCCA Pro Trans-Am series was held at the iconic Mid-Ohio Sports Car Course, in combination with the Nascar Nationwide Series.

BC Race Cars Inc. had two entries, one in T1 and one in TA2, one of the very few teams who manage to compete in two classes simultaneously. Allan Lewis, piloting his #15 C6 Corvette carried the flag in the top class, while Harry Steenbakkers shined in the #07 BCR Camaro.

Allan struggled Friday to find the grip and speed needed to compete in this huge field. He was further hampered by a shifter mount failure which effectively lost him most of the second practice session. The crew was able to make repairs quickly, and Allan managed a 13th position qualifying result out of 19 cars.

Harry was fast out of the box, an incredible feat as he has never previously driven at Mid-Ohio . The team was able to keep tuning, making adjustments to improve the car for Harry, and it showed in qualifying: with only 1 hot lap (to save the tires for the race), Harry managed 5th place, ahead of the superstar drivers Tommy Kendall and Nascar hero Ty Dillon, out of 26 entries!

The race was equally exciting, as 59 cars took the green flag. Allan drove a great race, slowly and steadily making his way forward. While others were significantly slower than their qualifying pace, Allan found an additional 1 second/lap during the race, earning him an 8th place result. Well done!

In TA2, the top 3 pulled away slightly, leaving the 4-12 place pack battling it out. It was an incredible race to watch, 6 to 8 cars never separated by more than a few tenths, passing and re-passing each other. Harry kept station at the 45 minute mark of the race, still showing in 6th place and waiting for the command to go! He made a move to pass both 5th and 4th place cars, but slid off track in some oil off-line and stuck the car in “China Beach”. Regardless of the ultimate result, he showed how talented he is and his drive was far more mature than his tender 16 years would dictate. We can’t wait to put him in our car again, he certainly raised some eyebrows!

Next planned Trans-Am race for our group is most likely Virginia followed by Daytona at the end of the year!
http://www.gotransam.com/teams/index.cfm?tid=2405