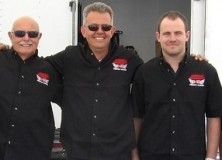 London, Ontario – The Lubrico Warranty V8 Trophy Series is pleased to welcome BC Race Cars as a series sponsor for the 2014 season. As a series sponsor, BC Race Cars will be providing competitors with a discount on the products and services they provide, along with random prize draws each race weekend.

The series, which is entering its’ second year, is dedicated to promoting the road racing of all V8 powered cars, from production-based to full tube-frame machines. According to BC Race Cars founder and car designer, Blaise Csida, “Becoming a series sponsor made sense since it combines two areas of interest to us; V8 powered race cars of all forms, and the serious club racer. While we specialize in the design and construction of TransAm and GT race cars, we also have many other services available and of interest to all racers.”

The Lubrico Warranty V8 Trophy Series, which operates as a “race with in a race” as part of the CASC Ontario Region GT Sprints division, will be comprised of five race weekends at Canadian Tire Motorsports Park as part of the CASC Ontario Region 2014 schedule. “We were excited when BC Race Cars expressed interest to us since many of our competitors know and admire what they offer to racers. It’s a natural fit,” said Terry Fletcher, who founded the series.

The first event in the series takes place May 3rd and 4th at Canadian Tire Motorsports Park as part of the Spring Trophy Races, organized by the British Empire Motor Club, as part of the CASC-OR Regional Race Series.

The Lubrico Warranty V8 Trophy Series is dedicated to providing a road racing series exclusively for V8 powered race cars. Its’ goals are to be low cost to the competitor, to enhance existing club races, and to maximize competitor fun. Now entering its’ second year, the series provides close competition and camaraderie among its’ competitors in a low-key, friendly, atmosphere.

BC RACE CARS has been the leading Canadian business in producing Trans Am legal GT1 race cars over the past 14 years. Our specialty are tube-frame race cars, but also includes other areas of racing that include the lapping day enthusiast to the serious club racer, as well as drivers seeking professional competition in North America. We have been involved at all levels of motorsports from club racing, HSR & SVRA Vintage classes, IMSA, Indy Lights, to Pro SCCA Trans-Am competition.